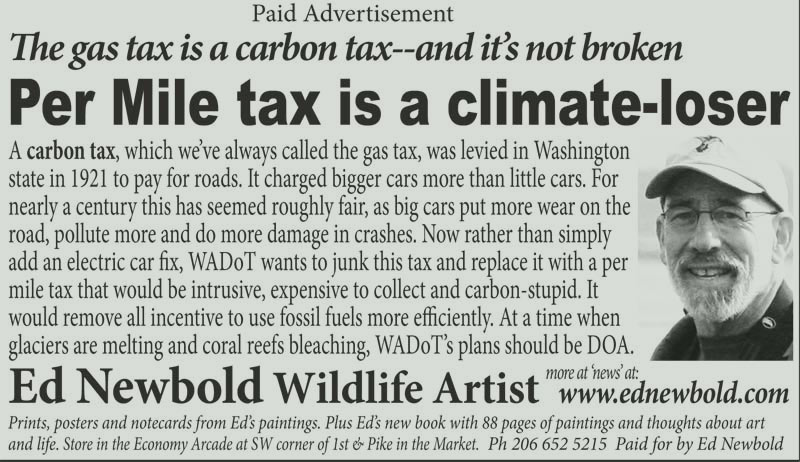 Posted at 05:31h in commentary by GreenReboot 0 Comments
0 Likes

I am running an ad in the Seattle Times A-section on Tuesday, Dec. 12, 2017 that is critical of the per mile tax.

Here is the wording:

A carbon tax, which we’ve always called the gas tax, was levied in Washington state in 1921 to pay for roads. It charged bigger cars more than little cars. For nearly a century this has seemed roughly fair, as big cars put more wear on the road, pollute more and do more damage in crashes. Now rather than simply add an electric car fix, WADoT wants to junk this tax and replace it with a per mile tax that would be intrusive, expensive to collect and carbon-stupid. It would remove all incentive to use fossil fuels more efficiently. At a time when glaciers are melting and coral reefs bleaching, WADoT’s plans should be DOA.

Now here are seven things about the per mile tax that surprise me:

#1 Why do reporters not seem to ask about its climate role?

I have yet to encounter evidence that reporters or agencies are evincing any concern or interest in what effect this proposed new large change in the way we pay for the roadway will have on climate pollution, be it positive or negative. If you go on WADoT’s (Washington State’s Department of Transportation) per mile page you won’t find any mention of climate. I don’t have time to list the myriad articles in the newsmedia about the per mile taxes planned for WA and/or Oregon, (an article by David Gutman in the Seattle Times on Sept 5, 2017 is an example), but I haven’t yet seen the question posed by a news reporter or mentioned by an agency planner. I find this all very surprising because supposedly the Northwest is a center of acceptance of the notion that anthropogenic climate change is real and that pollution from the ground transportation fleet of cars and trucks is a key source of climate change pollutants. A major change in the way we fund roadway and nobody is concerned about what effect it will have on climate pollution? That surprises me.

2 Well, OK, this isn’t that surprising:

The per mile tax would leave gasoline in a strangely exposed position as a rare, completely untaxed commodity in this state. This is because the sales tax was taken off gasoline, illogically but understandably, in an effort to soften the hurt from the original imposition of the gas tax. With the gas tax gone gasoline will be left as the only commodity in the state other than food and contraband that is not taxed. In other words it will be a commodity that the state is trying to get you to buy more of regardless of any pious words spoken about the need to sign the Paris Climate Treaty. And this will be in a state that is led by people who profess to be concerned about pollution and climate change. Politically it’s a third rail, and I’m not going to do an ad advocating a new tax because I’m not a total idiot and don’t want to be overly hated. I believe in tax shifting, not tax adding, so that climate advocates only have to fight a battle over climate and not fight a battle with principled conservatives who do not want to grow the public sector. However, the extreme low price of gasoline that will emerge after the imposition of the per mile tax, because of this special category of government subsidy –protection from normal taxation–is a surprise given that I had thought there was some concern building in WA state about climate change.

The per mile tax would shift the proportional burden of paying for roads to a considerable degree away from the 4 x 4s, Escalades and Hummers to Yarus, Fit, Leaf and Prius owners. WADoT wants this tax because it wants more money with no future declines or surprises, not because they care so much about helping big car owners, but they may have hit on a strategy that does have a certain brilliance to it. Yarus, Fit, Leaf and Prius owners live in the urban zone where people are culturally and politically “hardwired” to favor new taxation and to trust bureaucracies. The natural heart of resistance to this new tax would be the eastside and more rural counties, but if the WADoT presumably hopes its messaging can reduce resistance in these places by emphasizing how much the new tax will shift the burden away from big low mileage vehicles such as pickups. (Total tax burden has to go up because the new tax has to offset it’s own collection costs.) Meanwhile, WA DoT can try to slip the tax by the sleeping liberal enclaves which can be so deeply trusting of agencies and so altruistic in their willingness to agree to taxation. But this willingness will not be altruistic in this case as it will translate directly into more fossil fuels being used and more costs of pollution being “externalized,” i.e. paid for by others rather than the polluter. I’m surprised Prius owners are signing up as guinea pigs to test this new tax.
(Delia owns a 2005 Prius, by the way which we use when we drive together–most of the time–and I own a 1992 Geo Metro. I apologize for my part in contributing climate change pollutants into the atmosphere, our carbon footprint is above average because we so often take a Boeing or Airbus to Tucson to visit her folks. I believe we should be paying for the damage we do to the earth and its oceans and the costs we incur to taxpayers as the citizens hearts go out to every new victim of stronger and wetter storms, hotter fires, higher seas and more searing droughts.)

#4 Why no questioning of self-undoing prediction the per mile tax is based on?

The per mile tax involves a campaign built on a prediction—the prediction that the motor fleet is embarking on a major shift toward becoming more fuel efficient by a large percentage. It surprises me that people would trust the prediction of an agency that has a conflict of interest in making such a prediction. It also surprises me that I haven’t heard people point out that the per mile tax will create its own negative feedback loop that will undermine that very prediction. With a permile tax, the gas guzzler will be advantaged, and the electric and high-mileage car will be penalized. This will slow or reverse whatever gains that have occurred in vehicle efficiency. I’m surprised when anyone says there will be significant improvement in vehicle efficiency, and I believe these predictions are self-serving and complacent. The fleet has only gained 12% in efficiency so far from it’s peak inefficiency, despite all the Priuses and Teslas we see driving around town here.

#5 Why no mention of the psychological subsidy for gas guzzlers it will create?

It surprises me that I haven’t heard mention of a “psychological subsidy” for gas guzzlers that the per mile tax will create. If you buy season tickets to the Mariners, you have a “psychological subsidy” to go see more games—more games than, perhaps, you truly want to see. Every additional game you attend will give you the satisfaction of having attended games for that season at a lower average price. When you are paying the state to use a mile of road, why drive a tiny two-seater that gets 160 miles to the gallon? You might as well drive a Hummer, you’ve purchased the rights. Obviously this won’t change everyone’s behavior, as it’s perverse—sometimes we really don’t want to go that additional baseball game—but it’s a very real perverse incentive even beyond the per mile tax’s financial subsidy to drive and own a gas guzzler. I’m surprised this hasn’t been mentioned.

#6 Why the taboo against calling the gas tax a carbon tax?

It surprises me that no one seems to want to admit or declare that the gas tax is a carbon tax. This seems to be true of all sides in this debate, including apparently many other environmentalists (even a favorite of mine, Climate WA, doesn’t seem to make the point), nor do the investigators at the moderately right-of-center libertarian-oriented Washington Policy Center, which has come out against the per mile tax thankfully, and most significantly, reporters never seem to call it that. But the gas tax is a carbon tax. I’m surprised it’s so hard to find any place where this is written down or has been said. Correct me if I’m wrong and just not reading enough.

#7 Why are we not seeing the virtuous circle at work here?

In economics there are virtuous circles. Revenue-neutral Pollution taxes create them. If you read WADoT’s per mile page you start feeling so bad about the cost imposed by the gas tax you begin to need a handkerchief. But if you take a longer view, you can wipe away some of those tears. As the automotive fleet is subjected to a gas tax it becomes ever more efficient. Regardless of what the web page says, this will trickle down to most users over time. With the greater efficiency in the use of gasoline will come a lower marginal cost to drive, even if we assume that WADoT is successful in continuing to raise the gas tax, the decline in gas PRICES as well as the decline in the average total gas needed to get places will more than offset the increase in the gas tax. Meanwhile, the per mile tax creates no virtuous circles, only migraine-like headaches.

The Electric Car fix
An Electric Car fix is a devilish detail, I admit. An electric car fix, in order to be accurate in assessing cost, should take into account both miles driven and energy used in my scenario and we immediately run into the same intrusiveness and pay-upfront-or be-billed problems of the per mile tax. But the key issue is that the bill should be based on energy use rather than miles driven so that it is a continuation of the gas tax in theory and reality. Electric car buyers would be a smaller and less insolent group in general and the bill, if based on energy use, would be reasonable, so the DoT should take this advice as the phase-in of an electric fix might well involve less rioting than the imposition of the per mile tax, which nightmarishly will involve keeping the gas tax and rebating it at a later time. (Yet another complexity detail in a complex issue that could work in the per mile tax’s favor in terms of pollution but has a hellishly bureaucratic and anti-people feel to it.)

Everyone more or less agrees the per mile tax will be a heavy lift for the agency, as the initial polling data shows it to be unpopular. But most analysts, judging from a little scrolling around the internet, seem to think it’s on the way in spite of this. It reminds me of gypsy moth spraying, where every year the reporters dutifully regurgitate a press release from an agency and report that some poor souls will have to get sprayed-on this year. The reporters, or are they stenographers, obediently inform us that the pesticide Bt is a natural substance or some such nonsense and never bother to explain that it kills all Lepidoptera (butterflies and moths) species, which are a significant component of the ecosystem, and also never report that despite visually shocking defoliation in the East, forests tend to survive Gypsy Moth outbreaks.
The same factors are at work with the per mile tax. An agency writes a simplistic press release, the news organizations disseminate it, there is no substantive discussion, and in this case the proposed new tax will be put in place and we’ll just have to deal with it. Surprise me…please!