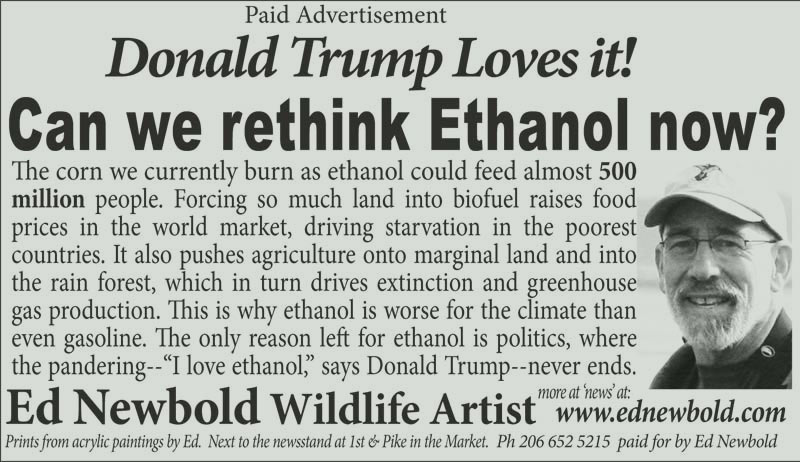 Posted at 07:27h in Rethink by GreenReboot 0 Comments
0 Likes

I will be running the ad shown above in the Seattle Times A-section on Tuesday, May 23, 2017.

If I were reading the ad the first thing I would like to know is where the citation for the opening claim came from: “The corn we burn as ethanol could feed almost 500 million people.”

Here is the quote from the article from the  April 20, 2014 Forbes by James Conca that gave rise to the sentence:
“In 2014, the U.S. will use almost 5 billion bushels of corn to produce over 13 billion gallons of ethanol fuel. The grain required to fill a 25-gallon gas tank with ethanol can feed one person for a year, so the amount of corn used to make that 13 billion gallons of ethanol will not feed the almost 500 million people it was feeding in 2000. This is the entire population of the Western Hemisphere outside of the United States.”

Conca goes on to make the crucial point that: “With more than 60 nations having biofuel mandates, the competition between ethanol and food has become a moral issue. Groups like Oxfam and the Environmental Working Group oppose biofuels because they push up food prices and disproportionately affect the poor.”

Corn that made it into the human food-stream

My ad goes on to accuse the ethanol program of displacing agriculture that would have been grown on this land into marginal lands and the tropics.

I got a taste of this myself when I visited North Dakota in the spring of 2015, the conservation-minded folks there were reeling from the recent loss of much of the privately-held prairie-land in southeastern North Dakota. Ranchers who had long held out against plowing the native prairie had finally given in, thanks in part to the rising price of land and corn as a direct result of ethanol. Prairie-nesting birds are the most imperiled group of birds on the continent and one that has suffered mightily from the loss of prairie, the Chestnut-collared Longspur, is shown.

OK, I hear some readers saying, “We can lose some Longspurs if it means saving the climate!” But it doesn’t save the climate, because plowing the prairies and cutting the rain forest for the displaced agriculture results in massive carbon emissions. Let me rely this time on an opinion in the New York Times from May 4, 2017 by Bret Stevens:

‘And there was this: “By using a worldwide agricultural model to estimate emissions from land-use change,” Timothy Searchinger of Princeton and other researchers reported in 2008, “we found that corn-based ethanol, instead of producing a 20 percent savings, nearly doubles greenhouse emissions over 30 years and increases greenhouse gases for 167 years.”’

Thanks largely to ethanol, America has become one big corn field with an ocean on either side.

The flaw in the ethanol program is at the conceptual level.  First, governments have given biofuels a mandate.  Of all the gifts government can give an industry, a mandate is the most precious and most market-distorting. Think about it: A subsidy of Ed Newbold prints might mean the government would pay $5.oo of the cost if you buy one. (Good for me!)  A mandate might say that if you go to the Pike Place Market, 10% of your gift expenditures must be Ed Newbold prints.  (Way beyond good for me, I’m placing a call to a yacht broker!!!) The mandate eliminates normal market rigor. I no longer have to worry about whether you will even like the product–the government is forcing you to buy (you can always boycott the Pike Place Market, and yes, I recommend boycotting gasoline-powered vehicles and buying electric as the only means of conscientious objection from being forced to buy ethanol, unless you’re near a gas station that sells ethanol-free gas).

When you’re at this pump, there is no way to be a conscientious objector who doesn’t want to burn food for fuel.

But enough of my hypothetical wishful-thinking art-buying mandate fantasies, the ethanol mandate is real, and the product that has been anointed by government for a mandate is precisely the type of product that cries out for market discipline.  The land and water inputs required for ethanol production are astounding. It is not scalable!

Here is how not scalable it is, quoting James Conca again:

“If all of the present production of corn in the U.S. were converted into ethanol, it would only displace 25% of that 130 billion. But it would completely disrupt food supplies, livestock feed, and many poor economies in the Western Hemisphere because the U.S. produces 40% of the world’s corn. Seventy percent of all corn imports worldwide come from the U.S.”

Another way to see the land profligacy of ethanol is to simply look at it’s current stats: 40% of the US corn crop, by far our largest ag product by land, is needed to offset less than 10% of the fleet motor fuel requirements.

This is where market rigor would be so invaluable:  the voracious land needs of ethanol would drive its price up too high for it to be viable, and this would save us from the immorality of burning up the world’s food supply in SUVs.

Post-script: The current administration and ethanol

The ethanol lobby got a scare and was already mobilizing its massive lobbying power when Donald Trump put Scott Pruitt in charge of the EPA. Pruitt is a long time foe of the RFS, or Renewable Fuel Standard, which is the official name of the ethanol mandate. I find that admirable in spite of other disagreements I might have with Pruitt.

More recently, however, it has become clear that the Trump administration will leave things in place. I’m not in the business of predicting the future, but I don’t think the ethanol lobby has a thing to worry about.  Attacking ethanol would involve Trump in a major fight, and where would the fortitude to fight that fight come from in Trump’s soul?

Indeed, the most recent indication comes from his Ag Secretary Sonny Perdue, who was wearing a pin at a recent luncheon: ” Ethanol is here to stay.”

And so is extinction and world hunger.  Thanks a lot, Sonny.